Give me your tired, your poor, your huddled masses of data – PIPS:lab at Warwick Arts Centre 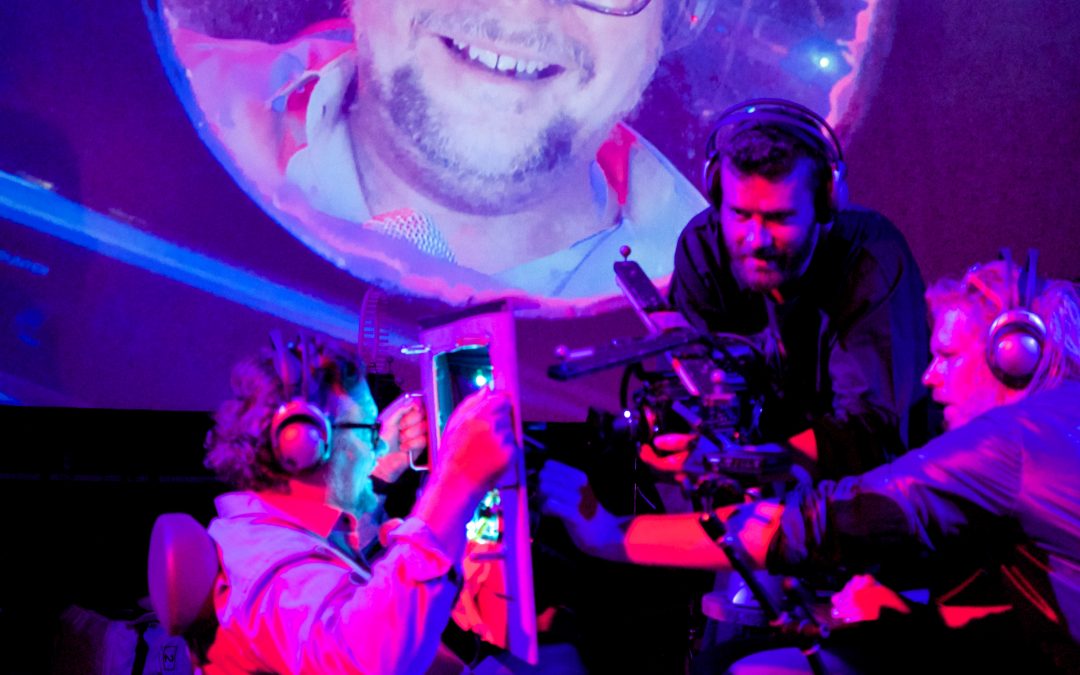 On Friday we hosted Amsterdam company PIPS:lab as part of our ‘Random String’ programme at Warwick Arts Centre. In this guest post, Mark Hancock offers his reflections…

There would appear, despite claims of the opposite, to be a steady flow of engaging, imaginative art events  around/in Coventry of late, that confound and challenge expectations. One organisation at the forefront of making that happen is Ludic Rooms: the Coventry-based digital arts organisation headed by Creative Director, Dom Breadmore and Associate Producer Anne Forgan.

Past events have included hosting the Random String symposium, bringing together world-class digital art practitioners to discuss and share ideas, and insights into their practice. This year, in lieu of the symposium, they have dialled things down. Friday night we shuffled cautiously into the Goose Nest, a temporary space at Warwick Arts Centre that seemed to be built from plywood, to watch a show by PIPS:lab.

Inside was a traditional theatre performance space: dark stage, traditional raked seating. Which is probably where tradition ends. The stage was littered with various bits of technology which the Amsterdam-based organisation make no attempt to hide. Instead of trying to hide the gadgets PIPS:lab opt to reveal and expose the audience to the software and the equipment, to invite people to question their complicity in a world where everything we do online is fodder for the data farmers to sell to marketing departments.

It’s hard to pin down exactly what a PIPS:lab event is, and even in the post- show Q&A this became more obvious. Instead of being pinned to any particular mode of expression, they talked about the multiple aspects of what they do and how it feeds into what we had just seen. The team, in fact, are made of of people from different disciplines, including theatre practitioners, programmers, musicians and videographers. This multi-discipline approach reflects something fundamental about the people using digital technology over the past few years.  As the knowledge needed to access the means of digital production has shifted from computer science skills, to broader, one might say everyday skills, many of us have the ability to craft from the building blocks of software and hardware. Or at least, the entry ramp is easier to climb. The shiny spectacle of technology has started to fade into the background, and the need for broader human narrative has filtered in. Something that the RSC attempted with their recent production of The Tempest, with mixed results.The RSC show felt like they had opted for sensory overload, but it still came down to good performance to sell us the story. Rather than being drowned out by the electronics, groups like PIPS:lab allow the technology to shift around them and allow for error and (that over abused phrase in the arts) playfulness.

Shadows in the Clouds, the show PIPS:lab performed on the night, looks at how willing we are to surrender our data. In this case, our visual data. With volunteers from the audience, they used motion capture cameras and scanners to capture body shapes, colours and micro-performance elements of the volunteers. These were then used to fashion a short sci-fi film as the final performance of the evening.

There’s a beautifully simplistic, almost retro feel to the imagery ofShadows in the Clouds. The lo-fi feel, probably a result of the need to render in real time. But it suits the performance. We aren’t here for the latest Marvel blockbuster. It’s the interaction and the humour of working live that engages the audience, not the awe and shock of CGI.

That  audience was a mix of school kids and curious adults, PIPS:lab may have emerged from the “dark corners of the underground Amsterdam party scene” but their shows are fully child-friendly and intellectually accessible without playing down to people. They want you to leave the theatre smiling, thinking and less afraid to question your complicit surrendering to the technology that we all carry around in our pockets every day.